Over the course of the last week, I watched in horror as the imaginary world I live in, or lived in, came crashing down around me. I built myself a world where discrimination was largely a thing of the past. A world where people worked together to achieve equal rights for all. I can’t tell you how many times I've told my daughters, and even my students, that things are different now. I lied. I lied to the children; I lied to myself. We still live in a country where it is open season on black people.

I believed that those days were behind us. Sure, there are isolated incidents of injustice, but there are always exceptions to any rule. This week, I had to face the harsh reality that these incidents aren't isolated and are, in fact, the rule. In a country where all people are to be treated as innocent until proven guilty, being black can be viewed in and of itself as an indication of guilt and has, at times, also summarily brought about a death sentence. I wondered, why are we so feared? What have we ever done to generate such a reaction? We have never held control over another people. We have never abused our authority over another people; in fact, we have never had power over another people, yet we are feared. And supposedly the justification for so many cases of roadside shootings by police is fear for their lives, from unarmed black people.

I know some black people are angry, and they have every right to be. They're angry because they're profiled, stopped, and often arrested for doing nothing more than living, oh, and being black. If we appear angry, if we express frustration, that increases the risk of turning up dead following a police stop. It is time to make a change. It is time for all of us -- every American -- to endeavor to unite the people of our country. We need to unlearn stereotypes and reshape our own thinking to allow for the possibility that we don’t know everything there is to know about a person because we know the color of their skin.

I am a mom and a teacher. I'm fortunate to live in a lovely community that is diverse on purpose. Most of the people in my town are here because they celebrate diversity and choose to live with and among people with differing ethnicity, interests, faiths, and beliefs. That said, I can no longer pretend that racism doesn't exist, even here. We all have biases and, like it or not, when we aren’t paying attention, they creep up and infiltrate our thoughts and influence our opinions.

It may sound like I think I've got it all figured out -- I haven't, I know I haven't -- but I'm passionate about it and it's personal for me, not to mention the fact that I'm opinionated and outspoken. I am biracial. I don't want to spend too much time on this because it's not really about me, but it's pertinent to my perspective. Biracial kids, maybe all kids of color who engage with kids who look different than themselves, hear from time to time, "but you're not like other (insert ethnicity here) people." The truth is, no one is. There is no one way that any group of people is.

People are individuals and, as such, are unique. Any idea that you or I have about a people is inherently false. Absolutes are rarely true. The thing about being a biracial kid is that even the ethnic groups that you identify with often don’t claim you, so you're an outsider even among your own people. It's an experience that many people know from their own perspective. I think it's similar to the experience of the person who's the first in their family or neighborhood to pursue a college education, and is suddenly accused of thinking themselves better than others, or of talking differently, yet isn't accepted by the academic community either because few people who look like them have broken the same barrier.

My personal experience, however, has always been to surround myself with people from different walks of life. It contributed to my ability to build that imaginary world where all people wanted equality. It allowed me to believe that those who were against unity were an unfortunate, ignorant few. Naivete perhaps, or merely by choice, I still believe that there are more who believe that all people are equal than there are people who don't. I think some people, because of their privilege, or because they have never acted racist, think that people of color just won't let go of an old problem. Yet recent events make it painfully clear that this isn't an old problem, but a current one.

Many teachers, myself included, have been overcome with the thought, "What can I do for my children, my students, and my community?" As teachers, we carry a lot of influence on young people, second only to family. Here are a few things that you can do right now to promote the kind of unity we so desperately need in our society in your classroom:

You can share your journey when you're comfortable, but what's most important is that you keep moving. Don't rest.

A brilliant man once told me, "Do what you can today. You can figure out tomorrow what to do next." This is a process. We didn't get to this place overnight. We won't solve the problems of the world overnight, either. Be present. Don't let your despair make you weary. You can't engage in every battle, but never give up, never surrender, never accept that nothing can be done. No one can do everything, but everyone can do something.

If we only have this one life to live, let it have been for something. Let's create a country worthy of our children. They deserve better than this, all of them.

Marion Ivey is a kindergarten teacher in Oak Park, Illinois. She has been teaching since 1992, most of that time in kindergarten. Marion is a member of the Illinois Writing Project and the Collaboration for Early Childhood. She currently teaches full day kindergarten at Longfellow Elementary School. Connect with Marion on Twitter: @Mrs_Ivey_says. 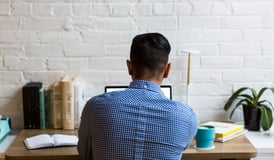 15 Ideas for Building Community in Your Virtual Classroom

15 Ideas for Building Community in Your Virtual Classroom