This time of year most of us are a little fidgety.

Summer is right around the corner, but as we're constantly reminding students “the year isn't over yet” and “don't give up,” some of us find ourselves needing the same pep talk from our administrators and social media networks. We're almost there -- but in the year of dabbing here and there, flipping hydration, and slime (yes, slime!) enters an item that's making heads spin.

What is this amazing tool that's taken our students by storm? The fidget spinner!

Wait. You mean that at the end of the year our students are obsessed, unknowingly, with NGSS phenomena? Students are loving science and some don't even realize it.

So how can “Spinners” be spun into relevant phenomena for science classrooms and what is the science behind the spin?

Here are six steps to understanding the science behind the spinner and six ideas on how to incorporate them into your classroom this spring. 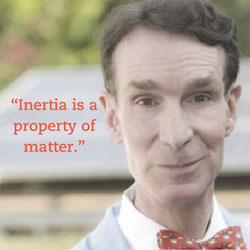 The science of fidget spinners starts before they ever start spinning. Look at it. It just sits there. Even when it appears to be doing nothing at all the spinner is exemplifying fundamental physics concepts.

Newton’s first law of motion says that an object won't accelerate until an unbalanced force acts on it; in the case of spinners, they must be spun in order to spin. While it seems like common sense and it may invoke a “duh” from students, don’t underestimate the science before the spin. In the infamous words of Bill Nye, “Inertia is a property of matter.”

2. What's In The Middle That Makes it Spin?

You may notice the ring in the center of the spinner. If you were to open it you could see a ring that holds little ball bearings. The bearings touch the inner and outer parts of the spinner so that there's not as much surface area in contact between the inner and outer rings -- an attempt to minimize friction. When you hit the spinner to start the spin, Newton’s first law takes hold again and keeps the spinner spinning until the unbalanced force of friction ultimately takes hold. If there were no unbalanced forces (friction, wind resistance, etc.), it would spin forever when started.

Looking at a stationary spinner is great, but how often does that happen? If you want the object to rotate you have to exert a torque on the spinner. Torque depends on the magnitude of the applied force, how far from the rotation axis the force is applied, and how much of the force is perpendicular to the arm of the spinner. You'll need to push it with a lot of oomph as far from the center as possible, and at least slightly in the direction you want it to spin.

4. How Can it Stay Upright?

The spinner will rotate and wants to keep spinning in the same direction. It may even feel a little funny when you try to rotate it. This is conservation of angular momentum and it’s actually pretty cool. In order to change angular momentum, the spinner needs a torque (a force pushing). If the world isn’t perfect and the spinner is on an uneven surface like a pencil eraser, the tip of your finger, or even if it tilts a little, this un-aligns the center of its mass and the axis it's spinning on. As it does this, gravity pulls on the spinner’s center, which causes an unbalanced torque and the angular momentum changes. The spinner appears to start to wobble -- but not fall over -- and this is called precession. 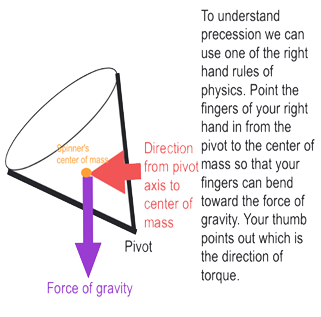 Back to those ball bearings: they aren't frictionless. Frictional forces always oppose motion and this slows the rotation of the spinner. Another way of looking at this phenomena is the conservation of energy. As the spinner spins, energy from spinning is converted into heat and sound because of friction.

How Can I Use Fidget Spinners In My Classroom?

Have the students start spinning different models at the same time and record the times of each spin; then have students graph the results. It’s a great opportunity to practice a subject that students aren't typically excited about (graphing) with something they love to do. 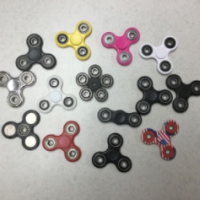 Pair the spinner movement with the maker movement. Whether they’re made out of Lego bricks, K’nex, a 3-D printed version, etc., there's something about homemade STEM (Science, Technology, Engineering, and Math) that could carry a love of your content well into the summer and beyond! 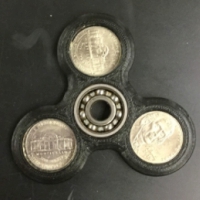 Take the physical model of the spinner and make it virtual. Students have engineered a way to demonstrate and enjoy the principles of spinners even when access to the physical form is prohibited. Using the Hopscotch app and 1:1 iPad devices, students can code spinners on their iPads and be equally as captivated.

Using the 5E lesson plan model, have students observe the spinners and then transfer their knowledge and understandings to other things that spin around them. The age old spinning bike tire, performers balancing spinning plates on sticks, and spinning a basketball on your finger all use the same concepts. The ball bearings used in spinners are also used in other fun summer activities like roller blading, skate boarding, etc. Have students brainstorm how these technologies could be used in other ways.

Take it to the lab and utilize the scientific method. Have the students observe and come up with variables, and then isolate the variables, develop an experiment, and report the results. 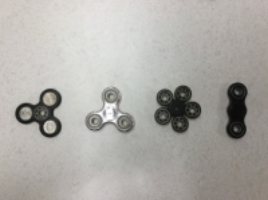 Let the students ask questions and then explore. Students may choose to investigate their questions about spinners and then challenged to use their data and analyses to develop a spinner 2.0. Reminiscent of the mousetrap, have the students engineer and build a better spinner.

Whether Spinners are making your head spin this time of year or you're as captivated by them as the students (like we are), you’ve got this, teacher! The Earth is spinning on its axis and we're one day closer to summer. Take a moment to enjoy the toy/tool, as we'll all soon have time to “play” too!