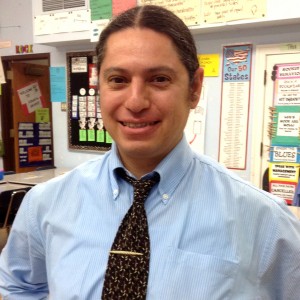 I want to introduce you to Oscar Newman, 7th and 8th grade Science teacher at Chicago Academy.  Oscar is an inspiration to other teachers in our building because he truly cares about kids and their learning.  He has an amazing grasp of science content and a variety of ways to make that content clear and comprehensible for our students.  He gets kids excited about science and really pushes their thinking.  They do incredible Science Fair projects because they have been using their inquiry skills all year and are able to design and conduct their experiments.  Oscar also has a variety live animals in the lab and has an afterschool Zoology Club. He also started the Green Dolphins - a group of students who manage the composting at our school.  He helps kids see that there is a bigger world out there that they a real part of and they can contribute to the greater good.

Oscar is a great resource to all the teachers at TCA.  He will share his ideas and help you brainstorm some ways to make science meaningful for the students.  He shares resources and willingly offers expertise to residents and colleagues.  Oscar also served as a mentor for National Board Certification for over 10 years and has helped numerous teachers achieve certification.

There are many examples of the powerful teaching and learning that takes place in Oscar’s classroom.  One project in particular stands out.

Through the Friends of The Chicago River, his class was able to investigate different sites on the Chicago River.  They performed chemical tests and looked for invertebrates, both of which were new skills for the students.  The students were readily able to connect this to their own lives as water is a resource they utilize each day.  The students loved the hands on learning and were able to present strong arguments for their findings.

When I ask Oscar why he decided to become a teacher he starts out by saying, “I didn’t think I’d become a science teacher.”  Oscar’s original interest was in social science.  He became interested in the idea that all areas of humanity such as race, culture, gender and age come together in that discipline. He states, “if you’re really observant, you can see the little details that create change every day.  He originally graduated with a degree in Cultural Anthropology with a minor in Sociology.  Following graduation, he put grad school at the University of Chicago on hold for a year.  He was greatly interested in the civil war taking place in El Salvador and the subsequent impact on immigration.  He wanted to study social movements.

He had always enjoyed working with kids and had served as a Scoutmaster.  A colleague of his through scouting suggested he substitute teach to see if it was a good fit for him.  He signed up as a day to day sub with CPS.  It was then that a happy accident occurred.  Oscar went to the wrong school than he was assigned to. He was placed in a room and subbed every day there.  The school was connected to DePaul’s Urban Teaching Corp and he began the coursework to get certification and a Master’s Degree.  The rest is history!

“Seeing kids discover something about the world inspires me.  That sense of awe and wonder happens to all kids at some point and it is a pleasure to be a witness to that.”

Oscar offers some advice for the TchAUSL community. “As we approach the holiday season, it’s important for all of us to take time to relax and recharge our batteries.”