Imagine yourself as an 8th grade teacher walking into a classroom of five and six year olds with the expectation that you're going to teach them aerospace engineering. You've been asked not only to teach a simplified version of the physics of flight, but also to discuss materials and aerodynamics.

Well, that was me recently. And my first thought was, "Wow! What did I get myself into?"

I had made an offer to all the teachers in my district to team teach a STEM unit in their classrooms. The kindergarten teacher, Jody Lambert, assured me that while her students would have tons of energy, they would really be into my active brand of instruction. Even with the assurances of a longtime colleague, I must admit that I was still skeptical and set the bar very low.

When I walked into the classroom, I had the students' undivided attention. I asked them to come over to the "reading carpet," sit crisscross applesauce, and cracked open the book David and Kayleen Design a Glider. This read aloud provided an overview of the engineering design process using familiar local subjects, such as the Wright Brothers and the National Museum of the United States Air Force, to help set the table.

After reading the book, I started a round of questioning: How do planes fly? Who were the Wright Brothers? What do engineers do?

This last question led to an unexpected conversation about Thomas the Tank Engine, but eventually one student mentioned that "they build things" and saved the day. While many of the answers were out in left field -- from my middle school teacher perspective -- many others were really impressive, and virtually all of the students wanted to take a stab at answering. I couldn't believe the number of hands that were up in the air! I'm used to quite a bit of class participation, but their level of enthusiasm was incredible, and I could feel my doubts start to slip away.

Now it was time for the engineering design challenge. We briefly spoke about the expectations and the goals of the activity. This was followed by a discussion about the properties of various materials, and how material engineers help select and even create new materials for modern-day aircraft. The students' mission was to select materials and then to test (and even measure) gliders of their own creation.

As the students went back to their work stations, they sat down with their partners and started to choose the materials they would use for their hoop gliders. (Click the link for a simplified version of the activity.) 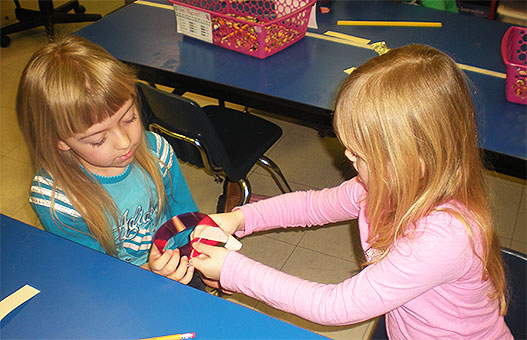 The discussion between the students was phenomenal! Everyone wanted to share their point of view. In fact, they couldn't wait to share and tended to back up their ideas with fairly sound reasoning.

For example: One student wanted to use aluminum foil for the hoops because it would be lighter, whereas that student's partner pointed out that strips of manila folder would probably work better "because it's less floppy." While a few groups just wanted to start building their gliders, the vast majority had thoughtful conversations. At this point my doubts were gone.

As the students gathered their selected materials, they were all very confident about their choices. Even the students that chose the inferior parts swore that their build would fly the furthest. This made me very, very afraid. I envisioned the majority of the class lining up to throw their gliders and then total disaster: 20+ crying kids! After all, I had seen many middle school students start to cry when their projects failed during the testing process. If teenagers could break down, certainly these little kids would be worse!

Then we conducted the first round of testing. A couple of the gliders flew really well, but the majority sank like lead balloons. 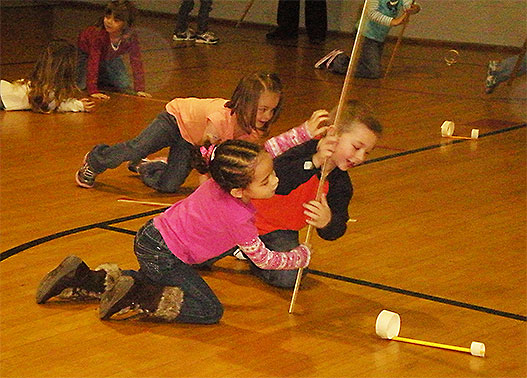 What came next was entirely unexpected: not one student cried or was disheartened at all. In fact, they all ran back to their workstations and started discussing a new plan. They had failed and that was okay. They had learned a lesson and were going to continue to improve their designs until they were successful.

That's when it hit me. These kindergarteners get it. They understand that learning is a collaborative process. Oftentimes you have to discuss the problem in order to find the best solution. Failure is also an option, and as long as you learn from your mistakes, it can be a positive experience. They had lived the engineering design process their entire lives.

If this is the case, why do I have to spend the first few weeks of each year teaching teenagers the engineering design process? The answer came to me: We break them. When students enter the educational system, they usually aren’t afraid of collaboration, experimentation, or guessing at a question. Many of us then sit them in neatly organized rows and tell them not to talk to each other. We often put them in silos and have them work by themselves. We then assign grades based on the end result, rather than the process itself. Failure is frowned upon rather than used as a learning experience. This makes many students afraid to take risks.

It was an eye-opening experience for sure. I clearly underestimated the natural curiosity that we all once embraced so fully. I forgot that children have an innate ability to learn through the iterative process. That they are natural born engineers and scientists.

As educators, we need to foster and develop these abilities rather than tell students to pack them away when they walk through our classroom doors. Many universities and industries complain that our students often come unprepared to collaborate and think outside the box. In my opinion, the best thing that we can do is create a culture in our schools that allows for our students to retain and build upon these pre-existing characteristics. Then we can just sit back and watch them soar.

I'm looking forward to hearing about your experiences with elementary students undertaking similar engineering and design activities! Please share your thoughts and additional resources with the rest of us below.