Should Cursive Be Saved?

Recently, I asked one of my students if I could use his reading notebook so that another student could copy some missing notes. The student with the reading notebook writes in cursive. I didn't think this was an issue because I knew his notes were very neatly written and easily copied.

Not so. Why? Because the student who needed the notes could not read cursive. Oh my, I thought. When did this shift happen?

I remember when cursive writing was the norm. Which also reminds me of when I was in the 4th grade learning to write in cursive. I noticed my friend had awesome penmanship. I really thought it was beautiful and so did everyone else. She was writing like an adult and was only in the 4th grade. I told myself that I would learn to write better than her. Well, by the end of 4th grade, after hours of practice, my cursive writing came pretty close to hers. I was proud of myself -- and my cursive.

Today, if you google "cursive," a few of the first entries you'll find have titles like, "Fighting To Save Cursive From the Common Core," "Don't Write Off Cursive," and "In Defense of Cursive." This in response to the fact some educational theorists have argued that the tools we use to communicate are less important than what we communicate and how we do it. We no longer use a chisel and stone, the argument goes, because other, more efficient technologies have come along to replace them. Why teach cursive when we all type and text more than we write by hand? Researchers, on the other hand, point to the cognitive benefits of the physical act of moving a pen or pencil along paper. And others simply see cursive as part of our culture.

I understand that we are in the technology age. But I am concerned. My students are in the 6th grade and can't read cursive writing. They can't write their names in cursive. Which means they will not be able to sign important documents that require a signature written in cursive, or read important documents in their original cursive, like the Declaration of Independence. 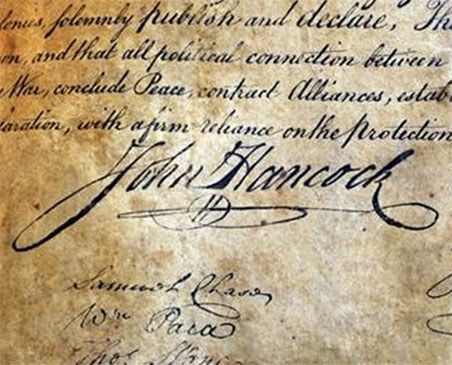 Should we revive cursive writing or let it die? I'm considering this question in light of the fact that today is National Handwriting Day. Though the day was founded by the Writing Instruments Manufacturers Association as a means to sell more pens, paper and other writing implements, it purposely lands on the birthday of John Hancock, the first signer -- in cursive -- of the Declaration of Independence.

Maria Perryman is a National Board Certified Teacher, America Achieves Fellow, Illinois Teacher Champion, and sixth grade reading teacher in Chicago's Public Schools. This is her 30th year of teaching. She has experience as a school-wide literacy coach, city-wide reading coach, and assistant principal. Maria has also made workshop presentations at state and national conferences, as well as in Haiti and the Dominican Republic. Follow Maria on Twitter: @pedcompany