Teacher Appreciation Week has once again come and gone. Lauding and applauding for five days, from those who have been impacted by an educator, directly or indirectly. Whether it be the third grade teacher that taught cursive writing or the high school teacher that inspired a love of writing or civics, the second week of May is the perfect time to show that teachers matter and that their role in your life -- or your child’s life -- has a special place in your heart.

As an educator, I always look forward to Teacher Appreciation Week. It falls during state testing, providing a brief respite from the high-stakes atmosphere that not a single teacher, student, or family relishes. The reinforcement of a hug, flowers, handwritten notes, or handmade crafts brighten my day. A small token of appreciation from the PTA or the staff luncheon provided by the administrative team is a welcome break from the monotony of the daily grind.

Teacher Appreciation Amidst a Political Maelstrom

This year, however, Teacher Appreciation Week has lost some of its luster. While the aforementioned gifts and signs of appreciation still came, teachers across Kentucky are suffering from repeated personal attacks by Governor Matt Bevin. They’re underappreciated and often deceived by the Republican leadership in Frankfort.

In a heated battle that’s served as a call to action for the over 40,000 educators across the Commonwealth, pensions have been threatened, state education programs have seen their budgets slashed, and districts are facing the real possibility that they will not have the funds necessary to stay in operation.

My personal favorite Bevin rant against teachers was his April 13, 2018, on-camera response to a statewide closing of our public schools to allow teachers to go to Frankfort to show solidarity on the last day of the legislative session.

Kentucky Gov. Matt Bevin on the teacher rallies today. “I guarantee you somewhere in Kentucky today a child was sexually assaulted that was left at home because there was nobody there to watch them.” pic.twitter.com/Q4PpzFsTt2

"I guarantee you somewhere today, a child was physically harmed or ingested poison because they were home alone because a single parent didn't have any money to take care of them... some were introduced to drugs for the first time because they were vulnerable and left alone."

Yes, ladies and gentlemen, that is our governor.

As an educator in Louisville, employed by the Jefferson County Public Schools, Bevin has taken his disdain to a new level. He has called our district an “unmitigated disaster” and spearheaded a state takeover of the district as part of what our mayor, Greg Fischer, has called a “war on Louisville.” 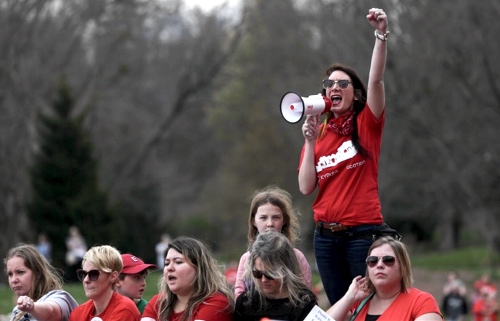 Solidarity in a Time of Strife

Kentucky is among a number of states that have been mired in a political maelstrom on education. Underpaid, overworked, and undervalued, many states have chosen to strike to have their voices heard and respected. From Kentucky to West Virginia to Colorado to Arizona (and soon, North Carolina), teachers have rallied together to strengthen their position and fight for a professional living wage so they don’t have to pick up second, and in many cases, a third job, to stay financially stable.

But, in spite of all the negativity embroiling public education at the district, state, and national level, Teacher Appreciation Week is upon us. And as this week comes to a close, it’s important to remember that it's not about the politicized attacks or the poor working conditions. It’s about us -- the teachers.

No matter the insults, the elected officials, or the legislation passed or vetoed, each and every day educators go above and beyond for their students. Bolstering classroom libraries, purchasing paid subscriptions to magazines or digital tools, bringing in snacks and drinks for special events, and a myriad of ways not listed here... educators give, and give, and give.

While one week of celebration is certainly not sufficient to repay them for their extra time, money, sweat, tears, and ultimately, their love -- it’s a welcome reminder that teachers matter.

From one educator to the 3.6 million others, I give a virtual fist pump.

Thank you for all that you do!

MeMe Ratliff is a Teacher Engagement Resource Teacher in Louisville, Kentucky, and co-founder of JCPS Forward. She has served as a Hope Street Group Kentucky Teacher Fellow and Statewide Engager, as well as the ECET2 Kentucky state lead. MeMe was a member of the Bill and Melinda Gates Foundation Teacher Advisory Council and was named 2014 Kentucky Elementary Physical Education Teacher of the Year. Connect with MeMe on Twitter: @meme3rat.