Do you find yourself shying away from political dialogue or even avoiding it at all costs these days? If so, you’re not alone. In fact, 53% of Americans say talking about politics with people they disagree with is “generally stressful and frustrating” (Pew Research Center, 2018).

And it can feel even more risky to integrate discussions about controversial topics into our classrooms. However, schools are an important place for students to learn how to have civic and political discussions with people who have different opinions from their own. In fact, schools are often more diverse than other settings in which youth spend time (Hess, 2009). In addition, when youth engage in discussions of current events and decision making, they report being more engaged in school. They also report greater interest in politics, improved communication and critical thinking skills, increased civic knowledge, and a higher chance of participating in civic life as adults (Gould et. al, 2011).

One helpful approach you can use in the classroom is a Structured Academic Controversy or SAC. This approach is illustrated by Elizabeth (Liz) Robbins — a high school Social Studies teacher at Gwendolyn Brooks College Preparatory Academy in Chicago, Illinois — in this new video, “Structured Academic Controversy (SAC): A Strategy for Civic Discussion.”

The strategy practices essential skills and dispositions needed to shift from political divide to discussion. It asks students to suspend their current beliefs and consider varied perspectives on the issue, collaborate with others to ensure a shared understanding of those perspectives, and work to come to consensus for effective policy recommendations despite differing views. As Liz describes, “The idea being to disinvest students from one side or another so they don’t see it as a debate or an argument in which whatever side you've been assigned must be the side that wins. And instead [a SAC] allows students to explore these ideas, and make sure that they understand them from both sides.”

Our students have ample opportunity to practice constructing arguments in school. Similar to a debate, students construct and evaluate arguments, however the key difference in a SAC is that the goal is not to argue, but to solve a problem. By removing the emphasis on winning, students take time to consider the complexity of an issue and understand and prioritize varied perspectives in order to solve the problem. They then apply and test their thinking in a new way by negotiating and constructing policy to address the problem for the betterment of the community. One student comments in the video how, “In a SAC there is a lot of grey area. There is not necessarily a binary decision. So it just goes to show how issues in the real world aren’t necessarily just true or false. There's a deeper ground to them and they should be explored.” 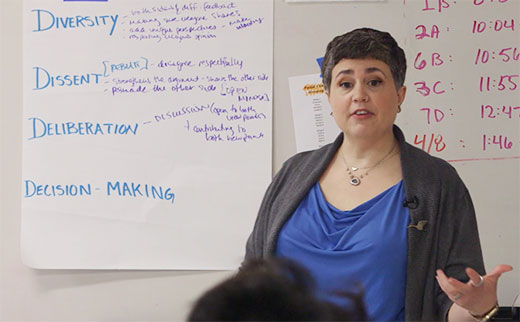 So when you feel the urge to shy away, remember that dialogue is essential to maintaining a healthy democracy and is a key aspect of civic and political life.

Finally, check out these general resources for how to integrate engaging, respectful, and productive political conversations in your classroom:

Heather Van Benthuysen is a veteran English teacher who has spent her career trying to figure out how classrooms and schools can help students realize their power as readers, writers, thinkers, creators, and community members. Heather is a National Board Certified English educator and trained administrator with almost 20 years experience as a teacher, coach, and youth advocate. She is passionate about teaching literacy skills for civic life, and the transformative effect of a civics learning culture on all school stakeholders. Heather is the Civic Education Manager for Chicago Public Schools and a Teaching Channel Laureate. She really wants to hear your powerful classroom stories. Connect with Heather on Twitter: @VanCerny. Erica Hodgin is the Associate Director of the Civic Engagement Research Group (CERG) at University of California, Riverside. She is also Program Director of the LEADE Initiative, working with communities and school districts to ensure all students have access to high-quality civic learning opportunities.