Three Ways to Use Virtual Science Notebooks in the Early Grades

This is the first year that I've been using virtual notebooks in my classroom. At first, I was a bit nervous about trying this with six-year-olds, but I felt it could open up so many collaborative tools for my students.

We are a Title I public school in Rhode Island and each student K-12 has his or her own Chromebook. My students are very familiar with different Google applications, but I was looking for something I could use in place of a science notebook. I was introduced to Seesaw by a colleague and decided to give it a try.

Using a science notebook with first graders can be challenging due to the laborious task of sounding out words. They tend to lose their enthusiasm and the writing doesn't capture their “Aha!” moments. I wish there was enough time in the day to sit with each student and discuss new learning, but we all know that's not possible.

Using Seesaw has solved this challenge. It allows students to record themselves explaining their learning. They're so excited and it's evident in their videos. Seesaw will save a student’s video and send it to the teacher’s dashboard before they can publish it. Teachers can view the video and jot down questions, formative assessment notes about misconceptions, or positive feedback. Seesaw also provides a feedback function where teachers can leave a note for the student on their dashboard about their work.

In this video, you'll see Graham explaining Newton's Cradle. I definitely captured his enthusiasm, but he never really explained the Discipline Core Idea (DCI), which was the focus of our learning. I was able to debrief with Graham the next day and have him clarify his ideas.

Drawing a Model to Represent Learning

Some students in first grade lack the fine motor skills to skillfully draw and label. Virtual notebooks can give them the tools to model their thinking. Students are able to illustrate their learning, use the label tool to add vocabulary, and there is a font style component to help add detail to their drawing. Virtual notebooks allow for differentiation, which is noted in the illustrations below. Students can also take a photo of their model in place of an illustration and use the video tool to describe it. 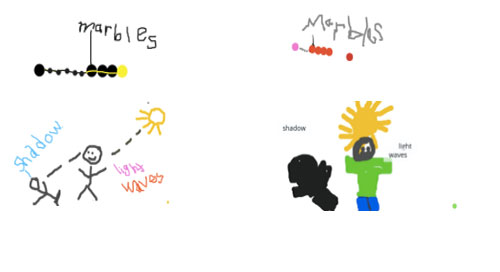 Using virtual notebooks, I'm able to insert links, videos, and assignment information. Students go to their dashboard to retrieve the assignment and can move through it at their own pace. In the example below, students were given an engineering task. First, they watched the video of “The Three Little Pigs” and read the prompt that was given. A link to the Padlet in the image below was attached to their dashboard and they were able to go to the board and brainstorm ideas and questions they had about the challenge. The photo of the wolf blow dryer was inserted so students could see the testing tool.

Using technology with six-year-olds can be a daunting task at first, but the benefits outweigh the challenges. I love the phrase, “We go slow to go fast.” As with most things in first grade, we spend time modeling procedures and scaffold as needed, and the same applies here. Time is spent modeling pieces of the Seesaw tool and students are given time to play with them. It didn't take long before my six-year-olds were adding comments to other students' streams and creating videos on their own. Seesaw can also be used on an iPhone, iPad, and Apple TV. And there is a Parent Access App which gives real-time glimpses into the school day.

Sandy Cappelli is a first grade teacher at Horgan Elementary School in West Warwick, Rhode Island. She has been teaching for 27 years and is a Rhode Island Federation of Teachers NGSS facilitator and AFT Thinking Math K-2 Trainer. She is also a Lead teacher in her district and Peer Evaluator. Sandy is a member of Teaching Channel’s Tch Next Gen Science Squad. Connect with Sandy on Twitter: @scappelli3.