Never Easy, But Essential: Tough Conversations in the Classroom

Sometimes they happen unexpectedly and other times we have to gear up for them. Regardless of how they march into our classroom discourse, there are some discussions that are just tough to have. For many teachers, it's our texts that provoke them, too. The chapter on evolution, the controversial current event or the classroom novel that exposes humanity's darkest moments. In these never easy but essential situations, teachers need to be prepared and confident to take on such complex conversations. 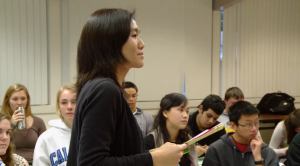 In a recent Teaching Channel video, we highlight a teacher who did just that. Esther Wu shows us her approach in "Socratic Seminars: Use of the N-Word." In this video, Ms. Wu is teaching Huckleberry Finn and tackling the tenuous, but necessary discussion about Mark Twain's word choice.

We know that this is a sensitive subject, one whom some find to be too precarious of a lesson. As a 15-year veteran of the high school English classroom and as a teacher who has worked with my community on several similar issues regarding book selection, I want to offer an alternate perspective.

True enough, Huckleberry Finn is often a book that is challenged or even banned in many schools around the country. But it is also still one of the most frequently taught books in high schools because it embodies the very complexities of the world that Mark Twain was writing in. On one hand, Twain offers us a friendship that crosses racial boundaries; on the other hand we see that there are cultural habits (like the use of the n-word) that his characters and his culture were still fighting to break.

I teach an Intellectual Freedom and Responsibility unit in my sophomore English class where students quickly learn that the list of books that have been challenged includes such titles as Winnie the Pooh (because animals talk), Harry Potter (because of the use of magic) or Catcher in the Rye (because of mature language and content). In this unit, I want students to learn about the complexities of time and place that can impact any writer. I also want them to learn to be discerning thinkers on their own, to understand that just because a book portrays part of that author's reality, it doesn't mean that we or the author condone that character’s behavior.

When I have talked with parents about such sensitive issues, one facet we generally come to agree on is the necessity of an adult presence when students are wrestling with tough issues. There's no doubt that our students contend with hurtful epithets on a daily basis. Whether they are driven by race, religion, sexual orientation, or just plain spitefulness, pejorative language is part of their reality. What most teachers and parents agree on is that confronting it with a careful adult presence is far more preferable than having kids try to teach each other about the harsh impact of such words.

In this particular video, I thought the teacher did a commendable job of keeping the discussion open and honest, but with sensitivity and empathy. Although Ms. Wu didn't have any African American students in the classroom, she did include a strong African American voice in the article by Leonard Pitts. I heard students being respectful and working through this tough conversation in an environment that aimed to "make sense" not "show intolerance."

All of this said, some may still have to agree to disagree, and I respect that. Despite the many variables a teacher would have to consider before walking into this kind of sensitive discussion, I hope our members will see that many teachers have books like Huckleberry Finn in their curriculums. I hope they will remember that our responsibility at Teaching Channel is to offer teachers the kinds of resources that make them stronger and more confident in the classroom. Certainly, these lessons model how to have a tough discussion in a respectful way.