Recognize the Importance of Your Team

I’m sure by now you’ve heard -- a brilliant star went dark in the cosmos.

On August 17, 2016, I was invited to meet with Dr. Hawking at Cambridge University’s Research Centre for Theoretical Cosmology to talk about community access and voice output machines. As I noted in an article for the Oregon Education Association’s quarterly magazine,

“Over the years as a special education teacher, I have had over a dozen students who use voice output devices. To inspire my students, I have shared videos of Dr. Stephen Hawking. 'If he didn’t use his talker,' I told one student, 'nobody would know he was the smartest man in the world.' Believe me when I say that Dr. Stephen Hawking is my hero.” 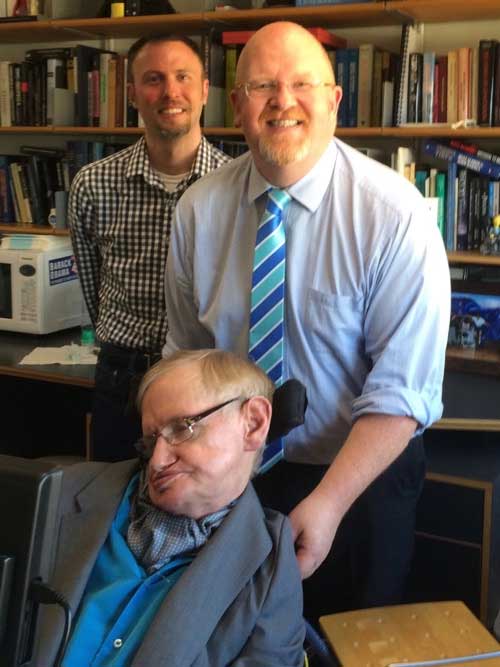 I’ve often wondered why Dr. Hawking invited me to visit him

I’d sent him a short thank you note for being an inspiration to my students, and I told him he was my hero. I can only imagine how many notes and emails Dr. Hawking received in a typical year from people just as impressed as I was.

Yes, I had nine students using talking devices. Yes, I was named Teacher of the Year while teaching a medically fragile classroom.

We did have things in common, but he shared those commonalities with thousands and thousands of teachers. And yet, the response I received was an invitation to visit.

I was told it was unusual to be invited to his office and I was honored that he would even give me five minutes of his time. What he gave me, however, was a couple of hours of joking, laughing, discussing his vocal machines, and his terrible wheelchair driving.

The devilish look in his eyes when I told him the story of how my students thought running over my feet was the funniest thing ever, showed me that some of those wheelchair “accidents” the Doctor had been involved in over the years might not have been so accidental. 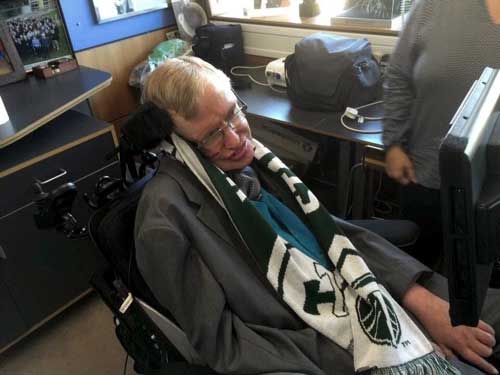 He did think it was funny that the picture of him wearing a Portland Timbers scarf I gave him had gone viral in the news. I’m sure he was used to popping up in the media from time to time, but we agreed it was cool that Major League Soccer and Univision were talking about advocating for people with special needs with this story as the vehicle. We had discussed how his just getting out there and doing normal things was a strong message to people with special needs.

In February, I filmed a video for ATTN: and they asked if they could use some of my pictures with Dr. Hawking. I wrote him a letter, explained the project, and we bounced a few emails back and forth on the matter. He agreed and said he was happy to support me. I told him about a YouTube video where someone had turned him into a disco star. He hadn’t seen it yet, but I’m sure he watched it soon after our communication.

His last words to me were uplifting and generous; and I sent one of the great minds to YouTube to watch a disco video.

I was left wondering -- again -- why Dr. Stephen Hawking would be so lovely to me.

I found out a few hours after he passed.

I was online when the news broke. It was with great sadness and some tears I wrote this note to his assistant:

“I've just seen the news here and wanted to send you and your team my condolences and best wishes. I know the level of commitment and caring it takes to help our friends whose bodies require that additional amount of support. I have often said that Dr. Hawking is my hero, but what went unsaid was that you and his staff are also heroes to me, because I know how important a part you played in the Doctor being able to continue to make an impact. His accomplishments are to be shared with the people who made sure he had the ability to continue teaching and speaking to the whole human race.”

I wrote this message because I’ve had a team of people like that working with me. My paraprofessionals have been the best teachers to learn from, the best people to be with, and the true underpaid heroes of education. Dr. Hawking and I talked about that.

I didn’t realize that it was the very reason he thought I was special.

As most of America was finding out our great physicist had left us, I was reading a note from his office in Cambridge. These words close the chapter on knowing one of history’s greatest minds:

“Dear Brett -- Thank you for these wonderful words. I know that Stephen enjoyed your company and was happy to help you in any way he could. You are one of the few who recognised the importance of his team -- without whom he couldn't have done all he did for so many years. And I will, of course, pass on your condolences to the nursing team.”

Goodbye, friend. May every person who has an assistant, a paraprofessional, a personal nurse, a school nurse, a speech tech or speech pathologist, a physical or occupational therapist, all hear these words:

“You are one of the few who recognized the importance of his team.”

Go recognize the importance of your team.