Do the Write Thing: Working to Stop Violence Through Writing

Editor's Note: Hear more about this program from Executive Director Basma Rayess in our #anewkindofPD podcast episode found on iTunes and Stitcher.

Michael had suffered for years as the result of his mother's alcoholism. A teacher encouraged Michael to participate in a program where students could write about their experiences with violence. Michael wrote a powerful poem describing the disappointment, anger, and fear he felt with the situation, but he had no intention of having his mother read it. However, he needed a parental signature so he showed it to his mother with great trepidation. When she read it, she was silent, but something tremendous happened. The poem helped his mother make a commitment to get sober and she has been so ever since.

The program that contributed to this story is the Do the Write Thing Challenge program (the "Challenge"), an initiative of the National Campaign to Stop Violence. Founded by the Kuwait-America Foundation (KAF) in 1994, the Challenge is a nationwide program that gives middle school students an opportunity to engage in classroom discussions about the problems of violence and bullying, to write about their experiences with violence and its causes, and to make a personal written 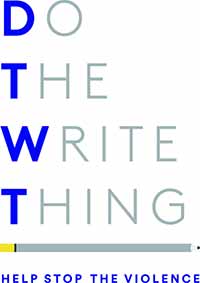 commitment not to engage in violence themselves. The Challenge particularly emphasizes personal responsibility and empowers students to do something about ending violence in their lives and in their communities. This program is run absolutely cost-free to all participating schools.

Having been touched by violence since a young age (surviving an armed attack at age 14 and living in Kuwait during the first Gulf War), I embrace the opportunity to show others by example how to utilize challenging life experiences and reshape them into something positive. It wasn't until I was in my early thirties that I realized the importance of openly communicating my own stories of how violence affected my life.

At age 32, while in graduate school, I was giving an oral presentation about nonprofit work and my connection with KAF. As I began speaking about my life in Kuwait during the Gulf War, I was overtaken with so much emotion that I couldn't continue the presentation. That was my "aha moment," when I first realized how deeply the war -- and other encounters with violence -- had affected me. Just simply being able to speak about these experiences not only felt therapeutic, but liberating.

This is why a program like the Do the Write Thing Challenge is so important, because it provides students a voice to share their experiences and ideas. This can be cathartic for young people who have been victims of violence. For all participants, it gives them a chance to reflect on what they can do to end violence in their own lives, schools, and communities. For some, the Challenge provides a context for them to make a cry for help and get access to additional resources.

Youth violence is widespread in the United States. It is the third leading cause of death for young people between the ages of 15 and 24. And let's face it, talking about sensitive issues like youth violence with young people is often uncomfortable. The students that participate in the Challenge have shown immense courage by standing up and speaking out about the violence that impacts their lives. Their stories reflect that of so many others and their impact will be felt far beyond the classroom. As important as these stories are, the solutions and commitments to ending violence are just as important.

In 2014, The University of Texas at El Paso (UTEP) performed a comprehensive study on the impact of the program on the students and teachers who participated in it. Teachers reported that it directly helped them to "establish mutually trusted relationships between them and students" and helped them in their actions to monitor bullying. UTEP further found that students developed greater empathy for victims of violence and bullying and were "more communicative with peers and family members instead of reverting to violence."

One by one these students are making a difference and using their stories and ideas to enact change. To coexist as one and live in peace and harmony, we must accept, appreciate, and inspire those around us. There is no better place to start than with the future leaders of our world: our youth.

Basma Rayess is the Executive Director of the Kuwait-America Foundation (KAF) in Washington, D.C. She began her career as a TV presenter in Kuwait, then after dabbling for a couple of years in the financial investment industry in New York, decided to re-evaluate the direction her career was taking. For the past 21 years, through the Do the Write Thing Challenge program, Basma and her team at KAF have successfully provided 1.9 million U.S. middle school students an outlet to examine the impact of violence on their lives and communicating solutions to changing the culture of violence that plagues their communities. Connect on Facebook at www.facebook.com/DtWTChallenge.