This is the last in a six-part series titled Making in Schools.

When I talk with other educators about our work at the Creativity Lab, they say, "Great! What do we do to get started?"

Often they want to do it all -- fully integrate making into their class, start an elective or club, set up a school makerspace. I encourage them to pick one small thing they can do — do one making project, start a club, find an area of their classroom to use as a makerspace. Taking on too much at once is overwhelming and soon gets dropped, becoming another one of those things you tried once. But starting small and building from there allows making to take hold and become what you do.

At Lighthouse, where making permeates many aspects of our program, we've built our program slowly over the last seven years, one block at a time. At the same time, we adopted a bias toward action, meaning we worked towards our long-term vision, but we didn't wait to come up with the perfect plan or to find the perfect program. Once we decided to move forward with a new part of the program, we jumped in and supported teachers in designing and implementing their vision. 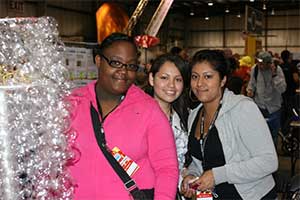 At one of our first meetings in the fall of 2009, my new boss Steve asked if I would teach an Earth Science class as an elective for our high school students in addition to physics. I wasn't really interested in Earth Science, but had coached a robotics after school club previously, so I asked if I could teach robotics instead. Steve was enthusiastic, and the seeds for our making program were planted. We started that year with retired laptops and Boe-Bot kits that supported students in learning about circuitry and programming. Students learned through robotics challenges that focused learning on specific understandings about programming and electronics. We entered a regional competition.

Just before winter break in 2010, after learning about the Young Makers program, I announced to my 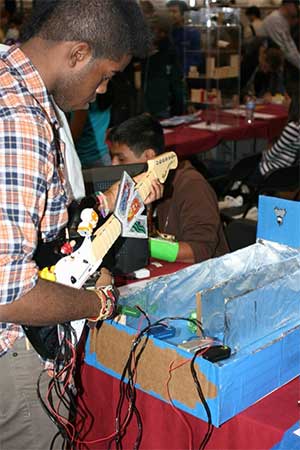 robotics class that we would all be bringing projects to the Bay Area Maker Faire that spring. We pored through back issues of MAKE: magazine, did research on Instructables, brainstormed our own ideas, and then formed groups.

That spring every student in the class brought a project to our first Maker Faire, including a motion sensitive light-up soccer ball, a recycled-bottle chandelier, and a water balloon launcher. We shared a booth with other young Makers, displaying one project at a time. The success of these projects, in which student choice was central, convinced our school community that this was one way for students to explore their passions. We realized that it also opened doors for students which they hadn't previously considered.

But, wow, it was really tough to support everyone to learn such different skills in those weeks leading up to the Maker Faire itself. So the following year I integrated a sampler of projects into the Robotics & Making class. Each student developed skills in robotics, woodworking, sewing, soldering, electronics, and programming an Arduino to get through some basics and expose them to some possibilities. At the end of the school year, we opened up our class and shared our project with our K-12 community as well as at the Maker Faire.

Around the same time, I noticed making in other classes. Our high school art class constructed shelters, and ninth grade science used making to build scientific apparatuses for their independent inquiries. I found other people in my community who were interested in doing this work, which made it much easier to move forward.

The following year we continued to build our high school elective by inviting the Lighthouse community to participate in our Prototype Fair in the spring. (Here's a brief glimpse into the Prototype Fair.) This gave students a hard deadline to have something concrete to share with the community, an opportunity to communicate with others about their project and receive feedback, and a full day to work on their projects. Having our K-12 community visit our high school makers had the unintended consequence of raising excitement and awareness of making among other students and teachers, and paved the way for much of our future growth in making. With our community and leaders excited about making, we submitted and received a state grant that supported our program’s expansion and outreach work for the next two years.

Have you noticed that we haven't talked about a makerspace yet? That’s because it wasn't until 2013 -- our fifth year -- that we found and created a dedicated space, supported by that grant. And even today, we prefer to make in our regular classrooms.

2013 was a big year for us, as we set up our makerspace with the support of our Maker Ed VISTAs, Jess and Anisa, started integrating making to support learning in K-12, debuted making in the K-8 after school program, began outreach and professional development work, and dubbed our program the Creativity Lab. This is the year that kindergarten making started in earnest. Making was integrated into multiple physics units, and students told stop-motion stories in Spanish class. To do all this, we visited lots of other making programs to get ideas, but also built on our roots in the robotics elective and other making projects.

In 2014, our middle school director decided to create an enrichment wheel in 7/8th grades where all students took spoken word, music, and making. In making, our students learned to make cardboard grabbers, participated in a survival week, and interviewed kindergarten students and teachers to create our first mini-makerspaces.

That year we also debuted our high school after school drop in makerspace. Students helped build out the space, learned to use the laser cutter, and had a space to do making homework. We partnered with Angi Chau to offer Designing Making Experiences -- a workshop we still offer six times a year. We integrated math and making for the first time using Turtle Art to learn about Cartesian coordinates. 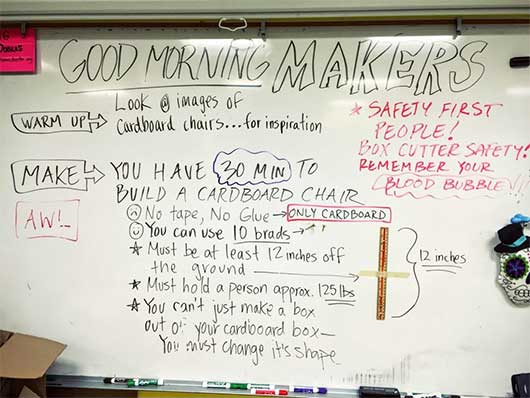 This brings us to where we are today, with many of the parts of our Creativity Lab program that you've heard described in other posts in the Making In Schools series, including our middle school programming elective, our work with Agency by Design, Maker Faire, and planning for Lodestar.

It's taken years to build our Creativity Lab Program to where it is today, with the work and partnership of many community members. Our program isn't done growing, we have lots to learn, and we have more work to do.

If you're thinking about starting making, start small, and grow your program over time.

Aaron Vanderwerff is passionate about engaging students in making and independent inquiry in the classroom, particularly students underrepresented in STEM fields. Aaron currently oversees design and making programs at Lighthouse Community Charter School, which includes coaching teachers and facilitating professional development. This effort came out of his making class, which culminates in students exhibiting their independent projects at Maker Faire. Aaron has taught high school science in the Bay Area for over ten years. Before joining Lighthouse, he taught ninth-grade physics and was science department chair at San Lorenzo High School, and taught math in the Peace Corps in Burkina Faso. Connect with Aaron on Twitter: @aVndrwrff