The practices of scientific argumentation and modeling involve using evidence and reasoning to create and evaluate claims about how or why something happens in the world. For example, why did a town flood in 1915 when a dam was built nearby? Scientists and science learners develop an understanding of the world through constructing arguments and models and determining which best account for observations at a given time. The Next Generation Science Standards (NGSS) invite all students — including primary students — to engage in argumentation and modeling as interconnected practices. 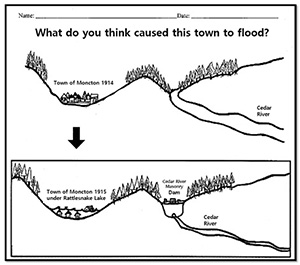 In this video series, we share key principles and strategies for engaging K-2 students in the practice of scientific argumentation with explanatory models. We join a second grade scientific community in the midst of exploring a real-life question: What caused the town of Moncton to flood?

As they pursue answers to this question, you’ll see that students are not making arguments about isolated observations (e.g., which kind of soil water flows through fastest), but rather arguments that connect to their explanatory models of the phenomenon (the flooding of Moncton*). We call this “model-based CER (Claims, Evidence, and Reasoning),” where argumentation occurs in service of developing models of phenomena and supporting deeper, more interconnected science learning.

The overview video gives a bird's-eye view of the unit and how students can be supported in making arguments about a phenomenon at the beginning, middle, and end of a unit. As you watch, consider the following questions:

Videos two and three dig into specific routines and tools used throughout the unit. The second video highlights the use of agree/disagree T-charts to build arguments with multiple sources of evidence over time.

We’d love to hear about your experiences with these strategies for scientific argumentation and modeling with your young learners. Please share your attempts at these strategies and any adaptations you make.

We looking forward to continuing to learn with you!

* Moncton, now known as Rattlesnake Lake, was a town in the Cascade mountain range in Washington state. After a dam was built on the other side of a mountain that bordered the town, the town flooded in a matter of months.

This work was made possible through support by the National Science Foundation.

Kitten Vaa is a second grade teacher at Brighton School. Kitten is passionate about elementary level science education. She was recently selected as the 2016 state-level finalist for the Presidential Award for Excellence in Mathematics and Science Teaching (PAEMST).