What We Can All Learn from a No-Hitter

As a rabid fan of the game, I have a habit of seeing things in terms of baseball analogies. Watching yesterday's no-hitter by Tim Lincecum, who is my favorite player on the San Francisco Giants, my live-and-die-by team, got me thinking.

Back in 2007, Timmy was a 23-year-old rookie with a blazing fastball. With his youth and talent, it was something he tended to take for granted. By the end of 2009, he had won the Cy Young Award. Twice. It all came so easily.

In 2010, he won his first World Series and both of his starts. By the 2012 World Series, he had pitched poorly enough during the regular season to lose his spot as a starting pitcher and was relegated to the bullpen. What's happened since has been truly inspiring and something we can all learn from.

The invincibility of youth was no longer his and he knew it. Rather than the flame-thrower with long hair and nicknamed "The Freak," he had to be mindful of what his capabilities were now. It was about finesse and pitch location. Taking care of his body and doing his homework on opposing batters by watching video and reading scouting reports – using his intelligence in combination with his physical talents to reach a new, although different, level.

Has Tim had phenomenal success since reassessing his game? Nope, not even close. But he does have two no-hitters since then (which is no small feat) and he continues to make adjustments.

Rather than just give up, or sit on his accolades from years gone by, he tries to refine his pitching every time he takes the mound. He uses his talents and intelligence to find new strategies with which to approach the game. He adds new pitches to his bag of tricks. He watches videos to learn and takes notes on those he will be facing. He may not win every battle, but his determination and joy for the game never falters. Does any of this sound familiar?

The next time you're feeling beat up and the hits keep coming, when your fastball won't top 90, the curve doesn't break and your changeup is fooling no one, take heart. And take a page out of Timmy's book. 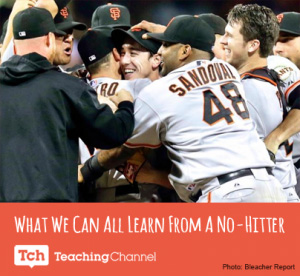 Sherri Devine is Managing Editor at Teaching Channel and was part of the original launch team of the site. She is dedicated to supporting teachers in their craft and is grateful for finally getting a chance to link her two great loves: Baseball and Teaching Channel.