Editor's Note: Isaac's two-week unit plan pictured in this post is linked in the text below (PDF) and to the image.

One of my favorite aspects of NGSS is the emphasis on students doing science rather than just learning about science. We can have our students talk about science all day, but it’s not until they actually start to experiment with science that their misconceptions and misunderstandings become clear and they begin to learn so much more.

I was recently reminded that this same learning process applies just as much to teachers in the NGSS transition as it does to students in the classroom.

I’ve been exploring and learning about NGSS for quite a while now. I’ve enjoyed going to rollouts, workshops, and conferences and bringing back strategies and lesson ideas I can use in my classroom. When I found out I’d be teaching chemistry for the first time this year, I saw it as an opportunity to really use all the things I’d been talking about for so long. So, using the proposed California Chemistry Framework as a guide, I planned and implemented my first attempt at a 5E-inspired, totally NGSS unit. And it didn't work out the way I intended at all.

In this two-week unit plan, students were to investigate certain simple properties of matter and explain them using particle interactions as part of PE HS-PS1-3. 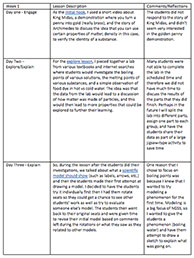 I had a hook I thought was interesting and creative, and I had a lab which would allow students to explore a phenomenon. I was going to let the students drive the learning while I gently guided them to great understanding. And at the end of the first week, I would have the students draw and revise models for the first time as they attempted to explain why water boils.

But their diagrams didn’t explain why water boils.

I’m not sure what I thought their models were going to look like, but what I got a was a lot of drawings of beakers containing bubbling water, some of which showed a bit of science with the inclusion of convection currents, but only two that had even the smallest hint of molecules or particles in them. At first, I couldn’t believe that so few students were able to make the connections I was hoping they would make. I had planned this week so carefully, and still the students could barely explain a (seemingly) simple phenomenon.

Looking back now, it seems obvious that my students would only have a surface level knowledge at this point.

I had pushed the concept of “inquiry” too far, too fast, and had expected my students to find their way in a dark room without any help.

I recognized at this point that week one of the unit hadn’t gone as planned and that I needed to start over, but I wasn’t ready to give up on NGSS and the 5E learning cycle completely. So, I regrouped and started with a new phenomenon, a new lab that was more directly tied to the Discipline Core Ideas (DCIs), and a bit more direct instruction to go along with the discussions and short activities. At the end of the week, I had the students do a final revision of their boiling water models, as well as take a small, short answer quiz.

The adjustments seemed to help. A lot of the student models were still lacking details, but quite a few were able to add information about the water being made of particles or molecules. And the results of the quiz also showed that most students had a basic conceptual understanding of particles and how particle interactions can lead to observable properties.

So, while everything seemed to work out in the end, planning and implementing this lesson was a very eye-opening experience. It turns out that synthesizing various pieces of information into a cohesive product is a lot harder than it seems, and it would be beneficial for me to remember this the next time I ask my students to apply the concepts we're learning in class. I need to remember to be patient because mistakes will be made, but, if given time to reflect, small failures can be incredibly productive.

Isaac Raymond is a high school biology and chemistry teacher at Alhambra High School in Martinez, California. He has been teaching for six years and is a graduate of UC Berkeley. Isaac is currently working as Common Core Site Facilitator and NGSS Facilitator for his school and serves as a member of Teaching Channel’s Next Gen Science Squad. Connect with Isaac on Twitter: @angrrybuddha.