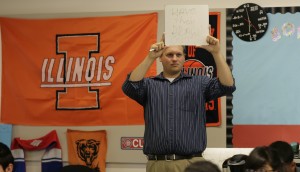 This week’s Tch of the Week is Mike Konkoleski, a high school mathematics teacher from Solorio Academy High School! You might have heard from Mike in his previous TchTalk blog posts. However there is more to this great educator! In addition to being a respected teacher leader in his school, he is a leader around our AUSL network.

Two of the many reasons Mike is my pick for this Tch of the Week are his open mind and positive. He’s always willing to try new things, leap into the unknown and take risks. For example, Mike was one of the first teachers to pilot TchAUSL in its infancy, giving our team honest and open feedback. Thanks to him, we have been able to make many important improvements.

Additionally, this year Mr. K took on a cart of iPads to implement in his classroom. Taking care to keep his students' learning as the primary goal, he has begun to explore how to leverage these devices to innovate his practice. As a mentor teacher, a TchCertified Educator and more, he already had his hands full. Nevertheless he added this challenge to his plate and dug in with a positive attitude.

That positive attitude rubs off on his colleagues and students. Working witth and learning from Mr. Konkoleski leaves everyone a little better off. Hopefully you get a chance to do this sometime in the future, if you haven’t already.

To learn more about Mike, let’s hear directly from him!

Why did you become a teacher?

I was born, raised, and currently still reside on the south side of Chicago.  Many of the people I knew growing up ended up not being successful in life, through various reasons.  The one thing that I saw in common with the people I knew who ended up being successful was that they had some sort of adult in their life who gave them support and helped them grow into successful adults.  With some people, their parents were the people who did this.  For a lot of people, it was a teacher who did this.  I wanted to be that teacher on the south side - the one who not only teaches, but pushes students to be the best that they can truly be, and to help them become successful later in life.  In other words, I want to be a constant in the lives of my students.

Who or what inspires you?

My students inspire me.  Every day, my students come into class, eager for the class ahead of them and ready to learn the material that is going to be presented to them.  It is amazing how I can tell day-to-day how much they grow, both academically and as a person.  This constant growth and eagerness, and watching them grow from young, naive freshman to mature seniors keeps me inspired on a regular basis.

What advice do you have for your fellow TchAUSL community members?

The best way to improve yourself as a teacher is to be proactive.  Do not simply teach and be happy with your lesson.  Go observe other teachers, get feedback from your veteran co-workers, and utilize resources (such as TchAUSL).  The students will be changing with the times, and you don't want to be that teacher who doesn't change with them.  As a teacher, you never want to plateau as a professional, so make sure that you are constantly growing in your profession.  There is no such thing as a perfect teacher - so always try to learn something new!