Do you remember in It’s A Wonderful Life when Zuzu Bailey says, “Every time a bell rings, an angel gets his wings?”

I have my own similar saying, but it’s a more modern version.

Every time I hear the sound of a tweet, a gay teacher loses their job.

Last month I heard a lot of tweets. Last month wasn’t a good month to be an LGBTQ teacher. In Texas, a beloved teacher was put on leave for showing a picture of herself together with her wife.

In Illinois, another teacher was under fire for not being in the closet.

I've become the go-to source when it comes to LGBTQ teachers. Not because I was Oregon’s Teacher of the Year, but because I gave a speech, where I discussed a recent heart attack and said:

Twelve months ago my partner may have been a widower, but instead I’m here as one of the first openly gay Teachers of the Year showing LGBTQ youth they have a future.

There’s confusion for some people about being out. For some, it’s about identity and the journey to finding themselves. For others it’s about acceptance -- and to be accepted you have to open up and lay it all on the line. But for a teacher it’s different. I could ask every teacher I know and I think 100% of them would agree with this statement:

We all agree on that, right?

How many would agree with this statement?

Our LGBTQ youth need LGBTQ teachers to be role models. To raise up our LGBTQ students we must make an effort to bring more LGBTQ teachers into the schools.

We know with certainty that LGBTQ youth who have open, supportive teachers in their lives perform better at school. GLSEN’s recent studies have proven that. However, people tend to ignore the statistics in favor of their own prejudices.

Soon after the speech, I was called in to meet with her and another supervisor. From then on, I wasn’t allowed to speak or write unless I asked for permission -- and my supervisors would vet everything in advance. Even more, I was ordered to bring all of my unopened, personal mail from home for them to open and read -- just in case. Later, I’d be forced to write applications to my district in order to speak to any person or group, so the district could decide if I’d be permitted to speak to them.

I was planning to meet with a High School Gay-Straight Alliance to discuss suicide prevention. My supervisors told me I could not. The reason given: this type of meeting had "no value to the district.” I was given the same reason as to why I couldn’t introduce the LGBTQ Youth Choir at a concert -- on a Sunday, or meet with the Board of Oregon Safe Schools, an organization that passed an anti-bullying law to protect LGBTQ youth.

And that’s just scratching the surface -- but you have to know a little bit about my history to understand why the Chicago Tribune called me.

Teaching “In The Closet” Wasn’t An Option

You see, for me, being in the closet wasn’t an option. When I was 15 years old, my best friend came out to me, went home, and then took his own life. If he had had an openly gay teacher or person of respect to turn to, he’d probably be alive today. End of debate. At the Teacher of the Year Honoring Ceremony at the White House, I made a statement for LGBTQ youth. I wanted them to see a possible future.

I never discussed my sexuality with my students, but being Teacher of the Year is a very public role. When my partner and I were married that May, there were more journalists than guests at our wedding. President and Mrs. Obama sent us a personal letter of congratulations. A week later I rode in the Rose Festival Parade, and it’s customary for spouses of those honored to ride along. Mike and I spent four hours on a Saturday -- the first gay couple to ride in the parade -- waving to 400,000 Portlanders lining the streets. 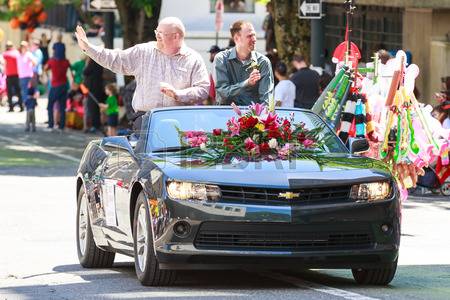 And so I was gay in a very public way.

And so I was fired in a very public way.

And so I fought back in a very public way -- and the Oregon Education Association (OEA) came roaring into the fight with me.

And the public rose up.

Suddenly, there were four new members on our school board of directors and the superintendent was fired. And headlines broke that said things like: “Emails Show District Tried To Blackmail Teacher of the Year.” I was eventually reinstated, while the Teachers’ Union fought off attempt after attempt to fire me.

And that’s why the Chicago Tribune wanted to talk to me.

Should I Come Out?

The Chicago Tribune asked the question I hate most:

“What advice do you give to other teachers trying to decide if they should come out?”

And a shudder runs through me.

Because here’s the deal: I won, but barely. And I only won because of my awards. I was fired just a few weeks after being the first Oregon Special Education teacher to be awarded an NEA Foundation Award for Excellence in Education. I had just been named the Oregon Teacher of the Year. I was one of the most recognized teachers in my field, but I only won because the district had just said I was the best teacher they ever had and followed that statement by firing me in response to my complaints.

After my termination, OEA received a copy of my personnel file containing excellent evaluations and letters of recommendations for the awards. The district had no negative records to show. I was the proverbial “golden boy.”

My district lied. My supervisors manufactured complaints, which my Union representatives tore down like a house made of tissue. The district retaliated with more lies and announcements to the press, including the release of my signed tax forms, which were later published online for anyone to see. The district was eventually fined and the state investigation came out in my favor.

But what other teachers will have that kind of support? The Union isn’t everywhere. LGBTQ people are a protected status in my state, as are whistleblowers. That’s not the case in most states. Few others will have a file full of letters saying they are the best teacher the district has ever had. One letter went so far as to say, “Brett Bigham should be Teacher of the Year EVERY year!”

That’s why I tremble when asked for advice about coming out.

Because the district may just eat the teacher alive.

And I divert them with pictures.

And when they ask me again, I show them my picture with President Obama and former Secretary Clinton, and the one with Dr. Stephen Hawking, and we talk about that. But once again, it’s a shell game that I can pull off because I have pictures of presidents and Hawking, and a cat who is super, super hairy. Not every teacher is going to have a super hairy cat to distract them. And it probably won’t work for nine months; it barely works for the one day I’m there. 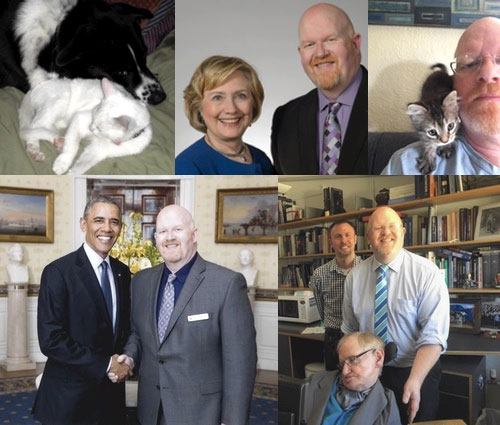 Sometimes the really smart kids will come up to me during break time and say, “There are a lot of stories about you on the internet,” and I remind myself that kids today look up everything -- even their substitute teacher’s name they see written on the chalkboard.

And that’s my answer to other teachers. Kids today look up everything. So you don’t have to be out -- but if you lie, there’s a good chance that they’ll eventually find out you lied. And if you lied about something so important, does everything you taught them come into question?

So think hard about where you live and think of the best and worst case scenarios. Think about where I live and what happened to me. Then plan for those questions that will come up over and over. And here they are, in the order they will be coming: “Are you married?” Followed next by, “What’s her, or his, name?”

Because you and I both know, the minute that kid looks up at you with trust in his or her eyes, lying very well may not be a viable option. 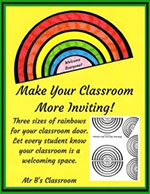 I love creating curriculum and sharing it with teachers. Download this free “Welcome Everybody” sign for your classrooms.

LGBTQ students are at a higher risk for suicide and signs like these will let LGBTQ teens know they have a safe place at school.