I'm always fascinated by math in the early grades. In kindergarten especially, it can be so challenging for teachers when students come into school with varying exposures to both language and mathematics, yet all of their ideas are incredibly intuitive, informal, complex, and foundational to the math they will encounter in later grades.

After reading a great deal of work by Doug Clements and this research study by Greg Duncan -- indicating that early math skills are one of the best predictors of later success in both math and literacy -- I really began to wonder... what is it about early math that makes it such a powerful predictor?

I kept this question in the back of my mind as I did this set of Math Routines with four different kindergarten classrooms.

In each routine, I tried to listen to the ideas beyond the counting, addition, or naming shapes and really observe the things students were saying or doing that could have implications for later academic success. That lens made each one of these routines so much more interesting for me.

I heard students observing and using patterns they noticed, building on one another’s ideas, using repeated reasoning, using a ton of spatial reasoning, making their own conjectures, thinking relationally about two things, and being incredibly creative in the way they saw and described their ideas. To me, it's all of those things, and probably so much more that I missed, that make early math so incredibly important.

If you missed the previous Tch DIY Math Routines, be sure to check out the third grade and fourth grade routines. While the content changes, the structure of the routines stay the same.

I hope you enjoy the videos and as always, I look forward to learning with you. Please leave your feedback, questions, and ideas in the comments section so we can continue the conversation. 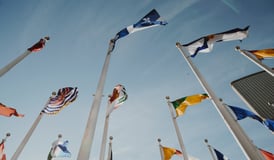