Help Kids Understand Math: Take Away The Numbers And the Question!

I'm sure we've all seen it happen at one time or another in math class. We give a student a story problem to solve and after a quick skim, the student pulls the numbers from the problem, computes with them, and writes down an answer.

If the answer is correct, we assume the student has a grasp of the concept. However, if it's incorrect, we're left with a laundry list of questions: Do they realize their answer doesn't make sense? Did they not understand the context? Did they simply pull the numbers and operate in order simply to finish or did they truly not know what to do with them? Most importantly, we ask ourselves, how can I help students make sense of what they're reading and to think about the logic of their answer in the context of the problem?

If we're lucky, we can identify the student's mathematical misconception and work with that. Oftentimes, though, the student's answer isn't even reasonable. Then what do we do?

This scenario has me reflecting on the Common Core Standard of Mathematical Practice 1:

Mathematically proficient students start by explaining to themselves the meaning of a problem and looking for entry points to its solution. They analyze givens, constraints, relationships, and goals. They make conjectures about the form and meaning of the solution and plan a solution pathway rather than simply jumping into a solution attempt.

The best way I've found to help students make sense of a problem is, ironically, to take the question out altogether. Inspired by the wonderful folks at The Math Forum, I do a lot of noticing and wondering with students in this fashion. Most recently, after reading Brian Bushart's awesome blog post, I've started taking the numbers out as well! Instead of students thinking about how they're going to solve the problem as they read, they are truly thinking about the situation at hand. It's been an amazing way to give every student entry into a problem and allows me to differentiate for all learners in the classroom. At the same time, I'm provided insight into my students' mathematical understanding.

Recently, I had the opportunity to work with a 3rd grade class. They had just finished their multiplication and division unit and would soon be starting work on fractions. In order for their teacher and I to see and hear how students apply the operations, make sense of contexts, and currently think about fractions, I thought it would be interesting to take a story problem from their Student Activity Book and take out the question and numbers.

I chose the problem below and thought about what I would learn about a student’s mathematical understandings and sense-making after they answered the questions.

Based on the idea of removing the numbers and the question, I changed the problem to this simple statement:

"Webster has boxes of granola bars to share with his class."

I anticipated the students would wonder about the missing mathematical pieces involved in an open-ended statement like this. I believed their wondering might lead them to develop questions that could be answered based on the very information they were wondering about. I knew the mathematical ideas of multiplication, division, and/or fractional sharing would arise and that I would learn so much more about their thinking than if I had given them the original problem.

I launched the lesson by posting the sentence on the board and recorded the things they noticed and wondered.

Based on what they noticed and were wondering about, I felt everyone had a strong grasp of the context and a sense of where this was going. I picked up on the notion that "there isn't enough information to know what's going on" and asked what more they would want to know. They responded that they wanted the answers to the first three of their wonders: bars per box, number of boxes, and number of kids in the class.

I asked them what questions they could answer if I gave them those pieces of information, and they responded:

At this point, I could have given them the information they wanted. However, I thought it would be so much cooler to allow them to choose that information for themselves. I was curious how they would go about choosing their numbers! Would they strategize about the numbers to make it easier for themselves? Would they even think that far ahead? What would they do with the leftovers?

When I told them I was not giving them the information and that instead they were choosing their own numbers along with the question they wanted to answer, they were so excited!

Some partners chose their numbers very strategically to make it easier for themselves. To me, this demonstrated a lot of sense-making and forethought of what was going to happen in their solution path. And, as an added bonus, despite being asked to answer only one question, the group answered all three! (Teacher note: if students choose numbers strategically and therefore finish quickly, give them extra bars to factor into their problem to see how they deal with the leftovers.) 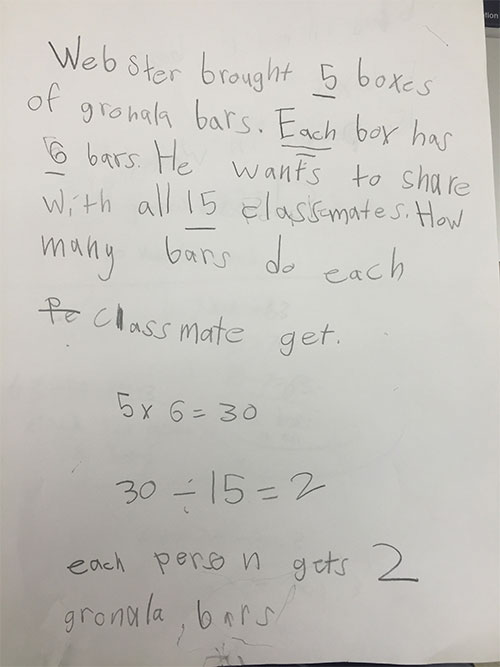 Other students chose the opposite route and strategically picked numbers to make it "harder for themselves." Check out the way these two students showed strong reasoning and perseverance through division of numbers larger than any they've ever worked with. 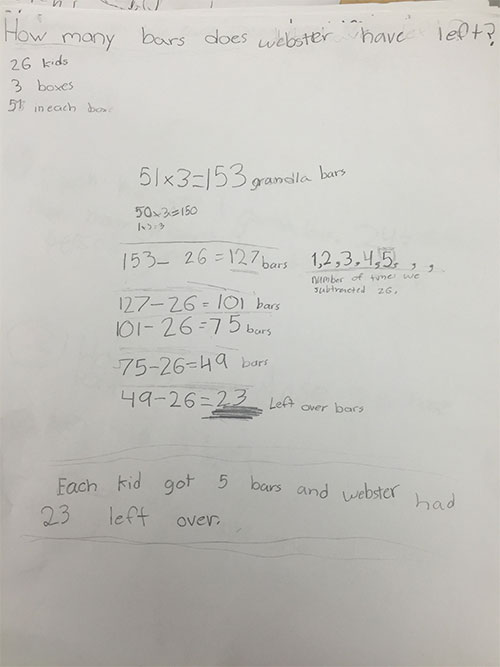 Others chose numbers without much forethought and dealt with some amazing leftovers. This was a great way to formatively assess students' thinking related to fractions before they began that unit. 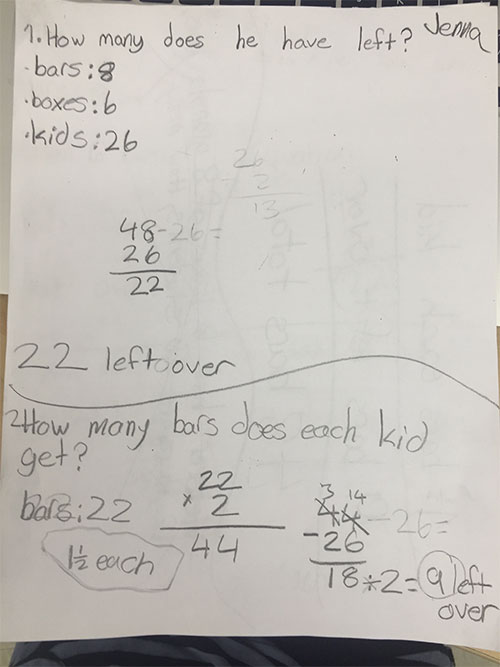 And then there are always the surprises. Who would have thought 3rd graders would reason about the leftovers in terms of percentages? 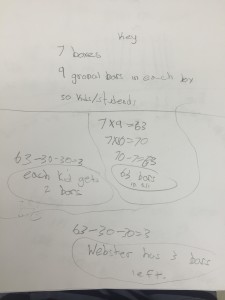 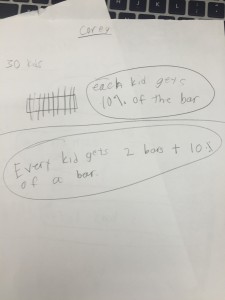 Finding Out What They Know

Reflecting on the difference between what students would have done with the original problem versus the reasoning work they did related to the one simple sentence, I'm amazed at the outcomes. I learned so much more about what each of the students know beyond simply multiplying five and six. Taking out the numbers and the question allowed every student to think about the meaning of the sentence, the implied mathematical connections, and to plan a solution pathway before jumping into a solution attempt.

I highly recommend everyone try this strategy with a word problem from your current text. It's a wonderful way to give every student access to the math and the freedom to think beyond just getting an answer.

If you know me or have ever read my blog, you know I could talk for days about student math work! You can visit my blog for a more detailed description of the work shown in this post, as well as additional work captured from the lesson.

This work was made possible through support by the Leona M. and Harry B. Helmsley Charitable Trust.