Hamilton: The Ten Dollar Founding Father is Priceless in Classrooms

Revolution, independence, the founding of our nation -- this was my favorite era to teach. I have more creative, exciting lessons for this period than for any other, no matter the course or

Fascinated by the often fortuitous folly of the Founding Fathers, I made it a point to show my students that this nation was created by a group of brilliant but imperfect men -- and women.

As I write this post I realize I have a confession: I never taught a lesson about Alexander Hamilton. Not exclusively. I respected Washington's steadfast leadership. I admired Jefferson's insatiable curiosity, elegant prose, and willingness to sit with his own dissonance. I appreciated Madison's reserved, discerning nature, his sharp mind, and his gift of persuasive reasoning. I envied Samuel Adams' ability to mobilize a community and, of course, to cause a ruckus. But Alexander Hamilton? Save the Reynolds fiasco and the Hamilton vs. Burr duel, Hamilton was a bore. I wanted to teach about the National Bank and the Coast Guard about as much as my students wanted to learn it.

But Hamilton -- and history for that matter --  doesn't have to be boring. Enter Hamilton: An American Musical.

From the moment I heard the first bars I was spellbound. As a social studies teacher, a former musical director, and a performer, I felt my worlds collide. I knew this was extraordinary. And I’m not the only one. Educators everywhere are embracing Hamilton as a revolution in the classroom, as well as in the theater. Most have not seen the production, myself included (*chokes back tears*). But somehow, that has no impact on the passion we feel and the desire to share this phenomenon. But, how to do it? 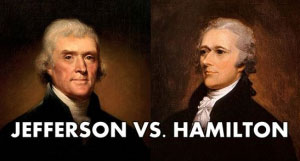 both student and teacher, I have always been captivated by the intricacies of constitutional law. To my chagrin, it was rare to find a student who shared this passion. There are exceptional resources out there, like this document based study offered by the Bill of Rights Institute, but they don't guarantee student engagement.

What we do know about the history of the Constitution is that the argument over federalism began in a series of heated political debates between Hamilton and Jefferson. So what if you start there? Andrea Moverman, who teaches 11th grade U.S. History at Millennium Brooklyn High School, suggests engaging your crew with an analysis of Cabinet Battle #1, which pits Alexander Hamilton in a rap duel with Thomas Jefferson.

As an extension, give your students an opportunity to uncover their own lyrical genius by composing a rap battle of their own (grounded in primary sources, of course). This strategy lends itself to an infinite list of topics. Read about this strategy and more in this Mind/Shift article. Then ask yourself:

Continuing with the Hamilton vs. Jefferson theme, Discovery Education offers up this phenomenal lesson that includes all the resources you'll need for a close read of Cabinet Battle #1. This lesson takes annotation to the next level with Genius.com. Here, students will be able to compare their interpretation of the text with that of Lin-Manuel Miranda and others. How is that for relevance? Branch out from this debate to any theme explored in Hamilton: An American Musical, as the annotation project examines the entire Original Broadway Cast Recording.

Use clips or selected songs with your students intentionally for a specific purpose, but teachers should immerse themselves in the entire 42 song recording. You will certainly emerge with an entirely new appreciation for "A. Ham." But, more practically, you will be able to clearly identify selections that are age appropriate for younger students. Younger students might like numbers featuring King George, such as “You’ll Be Back.” One way to engage younger students with annotation and close reading might be to use Hamilton lyrics in combination with a tool such as Actively Learn.

Washington: The Man Who Would Not Be King

Washington set many precedents as the father of this nation. His most honorable was to walk away from his presidential power. To explore this peaceful transition, Jim Cullen’s students at the Ethical Culture Fieldston School in the Bronx will investigate Washington’s Farewell Address. I love the selection offered by Our Documents, because students can see a high-resolution image of the handwritten address, but they can also access the transcript of the text for a close read and analysis. Here Miranda’s “Washington On Your Side” and “One Last Time” might also serve as primary sources ripe for analysis.

Did you know that Lin-Manuel Miranda is an improviser?

One critical concept for an improviser is game. Game describes a situation when we find something interesting or unusual and then ask: if this is true, what else is true? Recognizing the game in an improv scene is much like the moment when a teacher realizes how many opportunities exist to incorporate popular culture into a sometimes dry curriculum.

So, with Hamilton in mind, what else is true? Like Washington’s Farewell Address, pairing the selections from Hamilton with primary source documents, or even secondary sources like the Ron Chernow biography, will provide a multitude of opportunities to improvise and jazz up your repertoire. Don’t know where to start? Check out the fantastic list of pairings offered by The New York Times Learning Network.

Who Lives, Who Dies, Who Tells Your Story?

Hamilton intentionally makes a clear departure from an understanding of this nation’s history as one under the watchful eye of a pantheon of old, dead, white men. For the first time, many students are seeing themselves in the founding of this nation. Their stories are being told, both through an unconventional musical genre and through the faces on stage that mirror their own.

Consider these questions as you consider bringing Hamilton to your students: 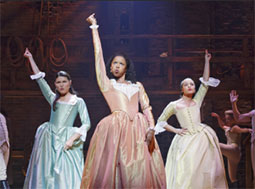 In a time when public figures advocate building walls to divide, Hamilton acts as a bridge to unite a people. Hamilton is hope.

Is Hamilton Only Golden to History Teachers?

Unequivocally, no! The New York Times Learning Network resource explores many ideas, including Hamilton wordplay, rhetorical devices, vocabulary, etc. In Hamilton: The Revolution, the choreography is described as vocabulary. Further, educators with a passion for music might explore how the influences of The Beatles, Biggie Smalls, Tupac, Ja Rule, and more find their way to the Hamilton stage. The list goes on and on. In this way, Hamilton is not only hope; it is also possibility. 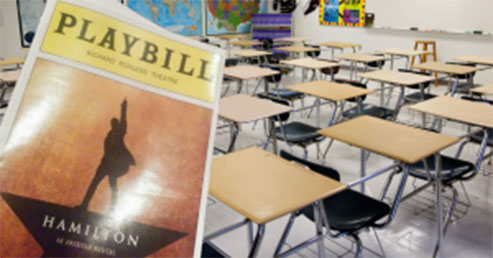 So I ask, echoing The New York Times Learning Network:

How will you teach with this "revolutionary musical about taking your shot, speaking your mind, and turning the world upside down?"

Lisa Hollenbach is a former high school Social Studies teacher and Department Chair, an adjunct professor, working with pre-service social studies teachers and behavioral science students, and serves as a mentor for the Teacher Leadership program at Mt. Holyoke College. Lisa is passionate about storytelling, teacher voice and leadership, collaboration, innovative instruction, social learning, and redefining professional development. Lisa is a member of the Bill and Melinda Gates Foundation Teacher Advisory Council, several ECET2 Steering Committees, and is a Co-Founder, Director, and Writing Coach for the National Blogging Collaborative, a non-profit organization that cultivates and supports the capacity of all educators to use their unique voice to elevate the craft of teaching and learning. Lisa leads the Collaborative in engagement and social media storytelling. Connect with Lisa on Teaching Channel, on her blog, or on Twitter: @lisa_hollenbach.