Students will understand the dynamics between people, ideas, and so on in more challenging passages.

Can you think of a teacher (especially a history teacher) out there who’s not interested in having students who can derive so much from reading non-fiction? 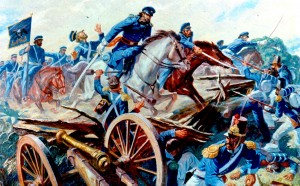 To meet this challenge, I’d love to begin in one of my favorite places--a DBQ and not just any DBQ, but the required Q2 US History DBQ, “Was the US Justified in Going to War with Mexico?”

Below are some teaching ideas which align to each College Readiness Power Standards that is assessed on the 10.2 Reading Interim.

In order to effectively answer the essential question posed by this DBQ, students must be able to understand the dynamics between people, ideas, and so on in more challenging passages (REL 602).

The set up of this DBQ is ideal for working on comparison, as the first two documents argue in support of the war, while the second two oppose it.

To determine if students can compare at this sophisticated level, here's an activity to try.

Summarize events and ideas in virtually any passage (MID602)

The Background Essay provides the perfect place for students to work on this standard.  Understanding the time, place, and story associated with this DBQ is critical for building prior knowledge before students read the documents and the ability in general to answer the question. Here's an activity using the GIST Strategy to build their background knowledge of the war:

After reading the background essay aloud to students, divide them into 3 (or 6) small group and give each group one of the below chunks of text to summarize using GIST.

After each group shares out their summaries, students should work independently to craft their own 20 word summary of the entire Background Essay.

Determine the appropriate meaning of words, phrases or statements from figurative or somewhat technical contexts (MOW 601)

With lines like “The Anglo-Saxon foot is already on (California’s) borders...armed with the plough and rifle, and marking its trail with schools and colleges” Document A is the perfect place to examine figurative language.  A graphic organizer with 4 columns (what the text says, what it actually means, an illustration, and how it could be used to argue for/against going to war) should work nicely. 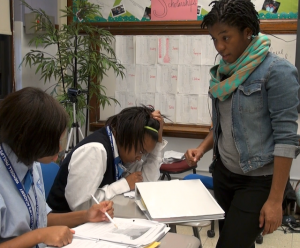 So many of the reading comprehension questions in the EV (Enhanced Version) of the DBQ ask students to do just this.  Here’s a sampling:

Draw generalizations and conclusions about people, ideas, and so in more challenging passages (GEN502)

Hello class discussion!  Once students have built prior knowledge, figured out figurative language and located and interpreted details, it’s time to dig in.  Here’s where you get to ask thought-provoking questions like, "What’s wrong with Manifest Destiny...without it the United States wouldn’t stretch from coast to coast and seriously, what would we do without California?"

This one’s surprisingly easy, as the main idea of the passage directly relates to the last EV reading comprehension question.  In the case of Doc A, students need to be able to talk about the belief manifest destiny and how it justifies a war with Mexico.

Time for the bucketing process, where students organize evidence into different analytical categories.   For instance, details about Mexican troops firing upon Americans on the “Texas side” of the Rio Grande found in the Background Essay and Doc B support the argument that the US was justified in going to war with Mexico.