We have covered a LOT of material in the Autism Circuit. Many of you have shared that you have learned so much and that you are now a more effective teacher. In bringing this program to a close, there are a few KEY concepts that we would like to review. This post is about perceptions of behavior and the understanding that all behavior serves one of four functions. 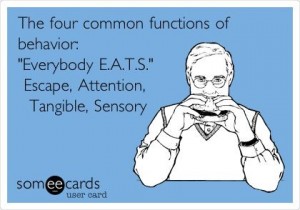 In visiting classrooms, very occasionally we hear from educators that their student is exhibiting undesirable behavior because he is just lazy, or he just wants control, or he just has a bad attitude, or any of the other words in the word art below. These descriptions usually come from people who believe that the student IS a problem. Educators with this belief system may choose to assign punishment as a consequence for their student’s undesirable behavior. But punishment is ineffective if the consequence does not address the function of a student’s behavior.

However, people who believe that the student is not a problem, but that the student HAS a problem, are able to understand that all behavior serves a function or a purpose for that student. When educators see WHY a student exhibits an undesirable behavior, they can then teach other behaviors that will serve the same purpose for the student. This approach is much more effective than punishment for long term behavior change. 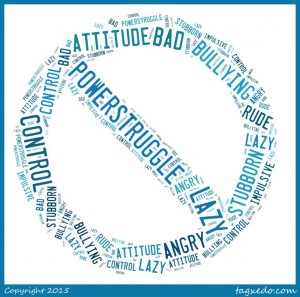 All behavior serves a function, or purpose, for a student, and laziness, control, and bad attitudes are not functions of behavior. Remember that “Everybody E.A.T.S.” The four common functions of behavior are Escape, Attention, Tangible, and Sensory. The function of a particular behavior may not be apparent without conducting a functional behavior analysis. If we are unable to see that the function of a behavior is one of these four functions, then we most likely need to look closer.

A student, Jon, may appear to be lazy. He is not competing much work and is often found doing “nothing”; however, a closer look may reveal that he only appears “lazy” in his math class because he is finding the course material to be too difficult; he does not know how to ask for help discretely because he is embarrassed to ask for help in front of his peers; and is therefore trying to escape by sitting quietly waiting for class to be over. A punishment such as a note home to mom stating that Jon is lazy in class will not be effective in changing this behavior. He will still not have learned how to ask for help and will still find the material too difficult. Jon needs to be taught a replacement behavior that will get him what he wants/needs in a more appropriate way. 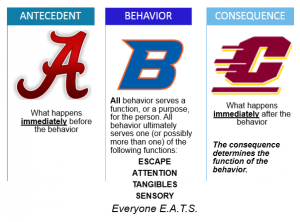 Many students with autism have skill deficits in the areas of communication and social skills. Jon, in his math class, will most likely need to be directly taught how to ask for help (communication) and cope with the pressure of asking for help in front of his peers (social skills). Jon, like many others with autism, may have difficulty picking up on the hidden curriculum in this classroom. He may need to be taught the system the rest of the class uses to ask for help.

If the classroom system is not effective for Jon, a possible effective alternative would be to implement a discrete signal system between the student and the teacher that will keep the teacher notified of how he is doing with an assignment. The student could have a red and yellow pencil on his desk. When he is starting to struggle, he can hold the yellow pencil in his left hand, and when he is stuck on a problem, he can hold the red pencil in his hand. The teacher will then know to give the student the extra help he needs. When the course material is no longer as difficult, he will have escaped the struggle. Jon will now complete more math work, and thus appear less “lazy”. The replacement behavior served the same purpose as the interfering behavior. Jon IS not a problem, and now he HAS less of a problem.

Cultivate a Culture of Error