Argument Writing--Where Do We Stand?

Ironically, it’s a recent morning where no students were present that has me so excited about where we’re heading with argument writing across the network.

I literally found myself running between the two rooms where teachers were discussing and scoring the “Was the War with Mexico Justified?” and “Asoka: Enlightened Leader or Ruthless Conqueror?” DBQ essays for fear of missing out on all the great buzz.

Seriously, check out this photo of Jess Hansen, Jessica Cippichio, Katie Hallberg, and Laura Bean leading one of the sessions.  Who knew that a calibration session could be so much fun? 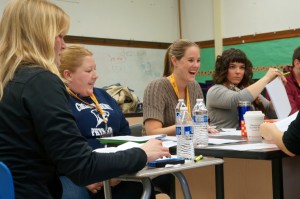 And so informative, especially the debriefing discussion at the end of the morning.  Across both groups some interesting trends surfaced in 3 important areas.

Where We Stand: As a network this is the area where we’ve seen the most growth.  With the exception of some of the 1 essays, most students’ essays were pretty well-organized (even if many were along the traditional 5 paragraph lines).

How We Can Move Forward: The Guided Essays found in the Teacher Toolkit section of each DBQ binder are great differentiation tools for students struggling to move from a 1 to a 2.  There’s a guided essay for each DBQ that looks a bit like an exercise in Mad Libs--students fill in the blanks for stems like Asoka was a ruthless conqueror because he ______________, _________________, and most importantly ___________.

For teachers whose students have mastered basic structure, there’s Gerald Graff and Cathy Birkenstein’s book They Say, I Say: The Moves that Matter in Academic Writing, which has some fantastic ideas how about how to make writing more sophisticated.

Where we Stand: Students are using evidence and citing sources, but not nearly at the level we would like.  Rarely did we see synthesis or a deep understanding of documents and students frequently seemed to lose steam as their essays progressed.

How We Can Move Forward: Incorporating more student discussion might be the key to improving this area.  An evidence-based discussion after the analysis of each document would provide students with an opportunity to vocalize their findings, as well as build onto those of their peers.  It also might provide teachers the opportunity to clear up any important misunderstandings.

Later on, it might make sense to incorporate a Trash-Out, the essential pre-writing strategy that allows students to synthesize evidence across documents, as they debate the DBQ essential question with their peers.  There’s a helpful overview of Trash-Outs and other similar activities included in the After component of our AUSL Historical Reading & Writing Framework.

Where We Stand: As one group put it in their trend debriefing discussion, “students are entering the world of reasoning”, which actually is a really exciting start.  Reasoning is challenging and mastering it is what frequently moves a student from a 2 into the proficient 3 range.

How We Can Move Forward:  Students need to see models of what argument looks like in highly proficient essays.  An interesting place to start might be to analyze with students the different essays from the Asoka and War with Mexico norming packets.

Students also need us to help unpack the thinking around different kinds of argument (of counter-argument is crucial).  This Advancing Argument resource begun last year by the History Network Team might also be really helpful in attempting this.

All of the resources mentioned above and some others like the scoring guide that we used January 24th are posted in our AUSL DBQ Group.  Please join the group, check them out, and consider adding some of your own.

Let's keep up this momentum around working together to improve student argument writing!