Argument Writing: 4 Reasons Why It's Writing Priority Number One

You probably don't need me to tell you that argument writing is a hot topic in education -- it has a special place in the Common Core State Standards (CCSS) and it is writing anchor standard number 1 for a reason. However, some teachers are asking if we really should no longer teach persuasive writing to our upper grade students. 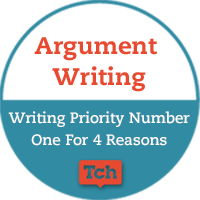 I have many fond memories of teaching persuasive writing. Students love discussing and debating their point of view, and it has the capacity to pull in reluctant writers because most students don't have trouble writing about their position on controversial issues. Also, persuasive writing has traditionally been required on high-stakes assessments such as the ACT. This is all good stuff, so why should we switch from persuasive to argument writing? Because, while persuasive writing may be a norm of the past, argument writing is the skill of the future.

Here are four reasons to make the switch from persuasive to argument writing for grades 6-12:

Argument writing is all about whether you have quality evidence and whether you can explain how your evidence supports your claim. The logical process of gathering evidence, coming up with a claim, and linking evidence to your claim is different than the passion of persuasive debates. Rather than ignoring contrasting points of view, different perspectives strengthen arguments by giving students the chance to test their claims with contrasting evidence and refine their positions. Introducing standards for accountable talk and argument frames is a great way to keep the discussion focused and academic in nature.

Have you ever had a discussion stall out in your classroom when a student says "Well, that's my opinion, I have a right to my opinion" and then refuses to entertain other ideas? Or have you seen a debate get too personal, with students polarizing to one side or the other with tempers rising? Turns out, this is typical of persuasion. Persuasion is personal, passionate, and all about winning. In persuasion, people often pull examples from their own lives to tug at the heart strings of their audience. They pick and choose the best evidence for their side, ignoring the counter arguments. This leads to a discussion that is more about who can speak the loudest or get in the most verbal jabs, not the best for promoting civil academic discourse.

3. Argument gets students ready for the next generation of high-stakes assessments

Next-generation assessments such as PARCC and Smarter Balanced, are going to require a large amount of argument writing (along with writing to inform and explain and, to a lesser extent, narrative writing), but they are NOT going to include persuasive writing. The future is argument writing. Argument writing requires evidence and the prompts require students to read across several texts, some of which include video and other media. The sooner you start preparing students for this the better. There are great examples on the PARCC and Smarter Balanced websites of argument-centered performance tasks. Achieve the Core has K-12 samples of PARCC-style opinion and argumentative writing. The 6-12th grade sample lessons have students write an argument from three texts and they have been annotated with the Common Core State Standards for argument. Check them out!

4. Argument prepares students for the real world beyond the school walls

Education experts Mike Schmoker and Gerald Graff argue that argument is "the primary skill essential to our success as citizens, students and workers." College professors always complain that students are not prepared to craft an argument when they get to college, and our students' performance on national assessments of argument writing bears this out. Argument is important in all disciplines, which can make it a common thread throughout the school day. Students are constantly bombarded with media manipulators trying to separate them from their money (or worse), and understanding what makes a sound argument is essential. It can help our students evaluate products and services for themselves.

So if you teach grades 6-12, make the switch to argument writing. If you teach grades K-5, read Writing Anchor Standard 1 up through the grades and see how your students are being scaffolded toward argumentation. Respond to this post with ways you are teaching or plan to teach argument in your classroom.