The Adolescent Brain: A Big Gulp Of Executive Function

I wrote the book Attack of the Teenage Brain! Understanding and Supporting the Weird and Wonderful Adolescent Learner, because of an advocacy bias: as a neuroscientist, I felt educators should have detailed knowledge about a cognitive gadget called executive function (EF). The reason? The 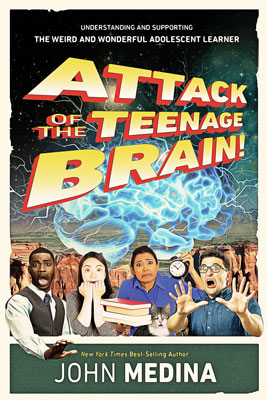 power it holds over the academic lives of teenagers. It’s like cognitive Red Bull. What EF is, and how to boost it, is the fleshing-out of this bias and the subject of this blog post.

What Is Executive Function?

Executive function is defined in different ways by different researchers. It goes by many names, from attention-shifting to self-control. Most researchers agree on two defining components to the gadget: cognitive control, which really does involve attentional states, and emotional regulation, which include behaviors like impulse control.

What does Executive Function Have To Do With Educating Teenagers?

It’s becoming increasingly clear that EF plays an outsize role in their academic performance. It’s also outsized in shaping socializing behavior -- and EF dysfunction may mediate many adolescent psychopathologies. That’s the reason for my advocacy. Here’s how researcher Roy Baumeister describes the impact of EF (which he calls self-control) on student performance:

“When researchers compared students’ grades with nearly three dozen personality traits, self-control turned out to be the only trait that predicted a college student’s grade-point average better than chance. Self-control also proved to be a better predictor of college grades than the student’s IQ or SAT score.”

That’s quite a thing to say. Given its academic effervescence, a logical question bubbles up: What activities improve Executive Function?

The book describes them in detail, four are listed here:

#1) Make aerobic exercise a permanent part of their lives.

Make it a requirement as regular as algebra. Bonus if you wrap it around an organized sport. Teen EF gets a big boost in response to aerobic exercise, with more consistent elevations if you add intellectual components. The effect is strong enough to actually inform a school dress code. There would be uniforms -- uniforms! And the uniforms would be gym clothes.

Also a requirement, but do the real stuff (there’s a cottage industry out there which, let’s put this gently, isn’t always scientific). Real mindfulness, with protocols developed by Jon Kabat-Zinn, studied by researchers like Sanger and Dorjee, demonstrate mindfulness’ powerful effects on teen EF. Do it in the morning, right after exercise.

Like mindfulness, there are numerous social-emotional learning programs, many of uneven quality. Get the best ones (the book tells you how to distinguish them). High-quality programs boost emotional self-regulation, a powerful component of EF. Said one researcher:

“Helping kids regulate their emotions can lead to an improvement in their grades... even though the intervention has nothing to do with academic achievement. This happens because the self-regulation skills that help control emotions are also helpful for things like studying and homework.”

People dragging around Jacob Marley-sized sleep debts don’t optimize EF behavior (try controlling your own grumpiness when sleep-deprived). Fill the debt by listening to researchers from Harvard and Oxford, beginning with optimum school start times: 8:30 am for 10 year-olds, 10:00 am for 16 year-olds. Rand estimates shifting start-times would save the US economy $8.6 billion after two years -- and that’s after subtracting “disruption expenses” incurred because of the wildly inconvenient cost of implementation, annoying as a carbonated burp.

Very few ideas in the cognitive neurosciences can be responsibly added to the menu of American adolescent education. But EF is as effective a cognitive beverage as my world can give. That’s a bias of mine, no question, but, from exercise to sleep cycles, it's metabolized in a sturdy, peer-reviewed stomach.

Dr. John J. Medina, a developmental molecular biologist, has a lifelong fascination with how the mind reacts to and organizes information. He is the author of the New York Times bestseller, Brain Rules: 12 Principles for Surviving and Thriving at Work, Home, and School -- a provocative book that takes on the way our schools and work environments are designed. Medina's book on brain development is a must-read for parents and early-childhood educators: Brain Rules for Baby: How to Raise a Smart and Happy Child from Zero to Five. His latest book in the series is Brain Rules for Aging Well: 10 Principles for Staying Vital, Happy, and Sharp. Medina is an affiliate Professor of Bioengineering at the University of Washington School of Medicine. He lives in Seattle, Washington, with his wife and two boys. Medina has been a consultant to the Education Commission of the States and a regular speaker on the relationship between neurology and education. He also writes the "Molecules of the Mind" column for the Psychiatric Times.